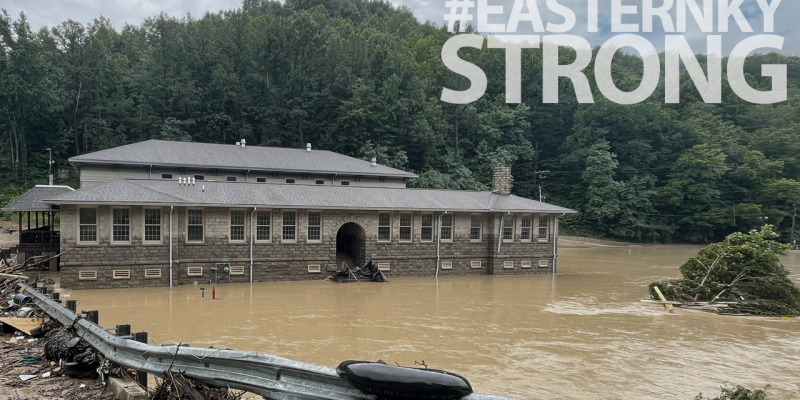 Beyond belief, that morning in July. To begin with, no one here really believed that such a thing could or would happen, not really. Historically, the creek would only come up so high and crest, and some of us with low-lying parking lots would have mud, at worst. You know, that well-named creek, Troublesome. Pesky sometimes.

Even at 2:00 am, when the power first dropped, and household white noises were supplanted by the steady thrumming of warm, summer rain, I looked out from my second-story apartment window over darkened Hindman and allowed that it would be a good night for sleeping. It was not.

Within just a few moments, the steady hum of rain had grown into a jet-engine howl and my cellphone began to alarm. I found a small flashlight and several inches of water shooting down Main Street. No surprise there, and flash flooding right in town seemed unlikely. For a few minutes, I attempted to go back to sleep. Within the hour, however, an odd, repetitive clunking emanated from downstairs in the school. Maybe Paul was down there, come to check on things? If only! What I was hearing was the sound of large objects floating around in the studio. Raising the window again, I focused that dim little flashlight on the parking lot of Jones Insurance just in time to watch my car going under. Hindman going under. Time seems to compress. Things are now smashing into the building, shattering windows and doors. A deafening roar rises up from Main Street. A white box trailer floats down past on its side, chased by garbage cans and lots of furniture. Indoor furniture.

At first light, I waded out to survey the damage. A dulcimer and a cased guitar raced away in the receding flood waters; I just barely managed to run over and retrieve them. I removed the log jamming open the luthiery door, hoping to keep anything else from floating off as the water level came down.

But the damage was done. The Appalachian School of Luthiery, the Appalachian Artisan Center studios, the Museum of the Mountain Dulcimer, and the Troublesome Creek Stringed Instrument Company were all destroyed. And as the morning light came fully on, so did the realization that there would likely be much worse damage out there in the county; I knew in reason that if things were that bad in downtown Hindman, that the situation would far more serious for folks up and down the creek. And God help us, it was.

2022 Flood Covid-19 Flood Troublesome Creek
We use cookies on our website to give you the most relevant experience by remembering your preferences and repeat visits. By clicking “Accept All”, you consent to the use of ALL the cookies. However, you may visit "Cookie Settings" to provide a controlled consent.
Cookie SettingsAccept All
Manage consent